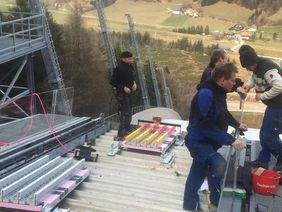 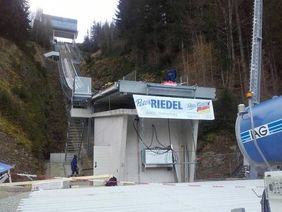 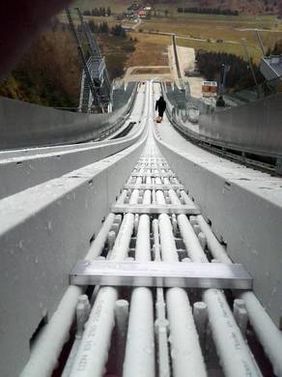 RASCHAU - In the previous year the Province of Styria and the Republic of Austria invested 4.2 million euros in the conversion of the famous Kulm. Within eight months the ski flying location in Bad Mittendorf was adjusted according to the requirements of the FIS. But once completed, the Ski Flying World Cup in January showed that the trajectory was clearly too high and too risky for ski jumpers.

In order to be prepared for the FIS Ski-Flying World Championships in January 2016 the Kulm was therefore once again rebuilt. The front end was slightly set back and the track was converted to the required ice track. To meet the FIS requirements, the Kulm needed a new, innovative track that could not only withstand more adverse weather conditions, but could also take the inrun speed of a ski flying hill into account.

When the Peter Riedel GmbH from Raschau, Saxony won the tender for the new track assignment at the legendary hill, a dream came true for the owner of the company. "We have installed our tracks all over the world, but a ski-flying hill and moreover the Kulm - that's a whole different ballgame," stated general manager Peter Riedel happily. "When it comes to a huge project like that, the prestige to build a ski flying hill becomes less important. More important is that we can guarantee the athletes a secure start-up. That means the track must meet the technological challenge to be both qualitatively excellent but also not too fast even with top skis or top wax.Previously, those speed tracks required by the FIS have only been tested to a starting length up to 105m, but we are confident that the in-run at Kulm will become better and safer with this change. The infamous Kulm-bend radius, that hill operator Jürgen Winkler has been blamed for every year, is now officially a thing of the past. The common objective was and is not to achieve new records at the Kulm, but to provide for the safeness of the jumper! "

The most important criterion of the tender was not only the quality and the safety but also the time factor. The order arrived only in mid-October and in a few weeks, from 14th - 17th of January the best ski jumpers of the world will compete in Bad Mitterndorf for the medals. "Of course this is a mammoth project, but we are professional enough to manage the project within the predetermined time. That’s a chance where you don’t think twice – to convert the Kulm right ahead of the World Champs - who could say no to that?", says Riedel.

In late November, the work will be completed – with less than seven weeks that’s a new record time for a ski flying hill.