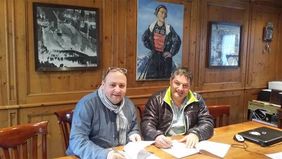 PARTENKIRCHEN – Just in time for the Four Hills Tournament and the prestigious New Year's ski jumping, the Ski Club Partenkirchen has taken an innovative step into the future. Although all eyes will be on the traditional New Year’s tournament on the Olympic jump, the smaller HS 89 ski jump will be more and more in the focus in the future.

On December 28, the club president of the SC Partenkirchen, Michael Maurer, signed a contract together with Peter Riedel, CEO of the Peter Riedel GmbH, for the provision of an unprecedented project in Bavaria: the equipment of the HS 89 ski jump with a specially developed, innovative ice track.

With the help of the Peter Riedel GmbH, the jump operator in Partenkirchen wants to test the equipment of a normal jump with a dual-track system as a year-round track - with this step the hill in Partenkirchen will be the first smaller normal hill in Bavaria to get a summer and especially a much needed ice track. "Normal hills are incredibly important for the training of the teams. However, in Bavaria, none of the hills is equipped with an ice track so far. Through the installment and testing in Partenkirchen, the location makes a big step forward in terms of training programs. Until now, many teams, including the German one, had to opt for Hinzenbach in Austria. In the future, they can now finally train in Partenkirchen", says Michael Maurer.