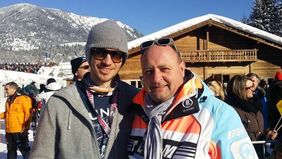 Just one year ago, Felix Neureuther tied the record with Eberhard Riedel, who had been the sole German winner at the Alpine course in Adelboden for 53 years. The Alpine starter of the former German Democratic Republic talked about this experience 2013 in his book "Spuren des Erfolgs".

During the Four Hills Tournament in Garmisch-Partenkirchen, a special meeting took place when Peter Riedel told Neureuther substitutionally for his dad, that he was quite the daredevil.

Both are members of the Ski Club Partenkirchen and they used their time to not only talk about sports history but also sports science. Germany's fastest skier wanted to know from Riedel how he could become even faster. Based on the scientific analysis of the Peter Riedel GmbH's ice track, Riedel was happy to share his experienced data.

"We took the picture as a memory for my dad back home in Oberwiesenthal. It was a very nice meeting and I wish Felix the best for his upcoming competition in Adelboden on the weekend", says Peter Riedel.