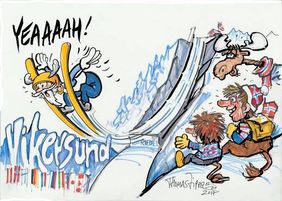 RASCHAU - Just with the New Year beginning, the German Peter Riedel GmbH secured a New Year's present that could not have been bigger: the team from the Saxonian village of Raschau climbs new ski jumping spheres and will equip the world's largest ski jumping hill - the Vikersundbakken.

With a start - up length of 134 meters and a hill record of 251.5m, not only the dimensions of the Norwegian hill are over - colossal, but also the timeframe of the project is: With the beginning of March the new, innovative track from Riedel must be installed and ready. From 17th to 19th of March 2017, the world's best ski flying athletes will compete for the podium at the Skiflying World Cup.

"Yes, it's a tight schedule. But it's not the first time we've been doing a project like this in a new record time! It is a great honor and a great Christmas present that we are allowed to update the world's largest ski jump. It’s a gift we have earned with professional work and good references - but that makes it no less beautiful! The entire team is looking forward to this project and the first jumpers on the new tracks”, says CEO Peter Riedel.

Even before the turn of the year, the team began with the production in order to meet the deadline. After supporting the competition at the New Year's Jump in Garmisch- Partenkirchen, the team went on with its work without a break. The gasp of relief will have to wait till March 19th. "At this point we will also have a company holiday until April, because what my employees are currently doing is remarkable and unbelievable," says Peter Riedel. "They are working through until March to guarantee the best conditions in Vikersund. I am very lucky to have such a dedicated team around me! "