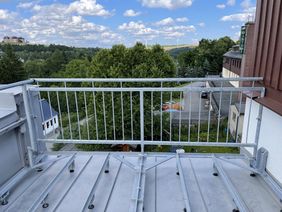 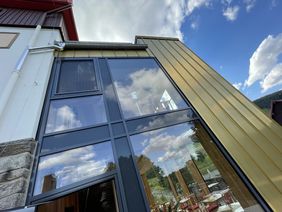 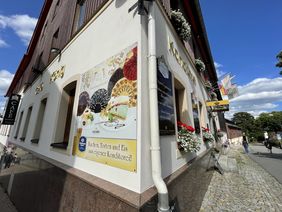 It is common known that sport connects. The Cafe König exists in the best location of Oberwiesenthal since 1925, so for almost a century! A special friendship has developed between the traditional Cafe and Peter Riedel in recent years. Frank Weber as the owner and his team are the fourth generation to run the business and, like us, have a great penchant for sports.

Frank Weber is one of the co-founders of the "Café König Pokal" as part of the Summer Grand Prix of Nordic Combined in Oberwiesenthal. In 2010 it was the former race director Ulrich Wehling who brought the trophy to life together with Café König. Since then, it has become an integral part of the Summer Grand Prix in Oberwiesenthal. Nordic Combined stars such as Johannes Rydzek, Bernhard Gruber, Eric Frenzel or Akito Watabe already won the prize and, what comes with it, the traditional cake. Even if the "big" pot remains in the local Ski Museum, each of them could take home a small souvenir in the form of a mini trophy. What should also not be forgotten is the financial commitment of Café König, which goes hand in hand with the cup sponsorship and represents an important financial part for the organizer.

In addition to the love of sport, it is above all the love for the detail that can be found in the delicious delicacies that Frank and his wife Antje are selling. From delicious cakes and homemade Italian ice cream to the unique, original „Erzgebirge“ cakes. So it was only a matter of time, that the café has already been voted twice as one of the best cafés in Germany, namely in 2018 and 2021, by the specialist portal „Feinschmecker“. And with son Patrick as the chef, who takes on a leading role in the company, the fifth generation is already in the starting blocks to continue this series. The Weber family always strives for perfection and the perfect mixture between tradition and modernity.  Consistent expansions and modernization show that want they keep their finger on the pulse of the times.

I - on behalf of my entire company - am really proud to be part of it as well and to be able to do the steel construction work for Frank for the outside area and currently the extension of the terrace with a wonderful view of the Fichtelberg.

Dear Frank, I would like to take this opportunity to say THANK YOU for your trust and for your great commitment in sports! It's nice to have such business partners, but above all friends by your side.